One of the most underrated cities in Southwest Virginia (and eastern Tennessee!) is Bristol. This is a guide to the best things to do in Bristol TN and VA. It also includes some other attractions close by.

Are you planning your trip to Bristol last minute?

If you’re traveling to Bristol last minute, you want to ensure you have lodging ahead of time! Below are some of our top picks in town!

Top hotels in Bristol (and nearby!)

We have decided to create this guide as one because let’s be honest, it just makes sense.  So please leave your tips on what to do in Bristol TN and VA in the comments! Thanks!

Just a note: We are not including going to Bristol Motor Speedway.  We assume that might be why you’re already in town!

The twin cities of Bristol, Virginia and Bristol, Tennessee merge together along the state line that carves its way through the center of the main street in both cities. While technically two different cities, the community comes together as a whole to help retain its rich history and culture.

Between the two cities, you will find plenty to see and do. This guide will take you through some of the best things to do in Bristol VA and TN!

Best Things to do in Bristol TN / VA

While Nashville is often known as the home of country music, Bristol was the birthplace of the influential music style.

In 1927, some of the first country music sessions were recorded using an electric microphone. This new recording style revolutionized music production and made it far more commercially viable.

The Birthplace of Country Music Museum looks to celebrate the impact the Bristol Sessions had on country music and the technology that created the success. There are various permanent exhibitions, with artifacts from the time of the recordings.

There is also space for temporary exhibits, which change throughout the year, including ones from the Smithsonian. There are also often live performances within the museum.

The Bristol museum also hosts an annual country music festival in September and you’ll find over 100 artists, both established and upcoming, performing on over 16 different stages. The museum is open Tuesday-Sunday and tickets can be bought on arrival.

Paramount Center for the Arts

Spend an evening at the stunning Paramount Center for the Arts, where you can watch a film or enjoy a concert. Built in the 1930s, the center was the cultural highlight of the city, drawing in huge crowds that would block the streets as they waited to get a ticket to the latest showing.

Sadly in the 1960s as the city’s economic success dwindled away, the Paramount Center also started to struggle and was forced to close its doors.

Thankfully, after being added to the National Register of Historic Places, the community was able to restore the theater to its former glory, including all the intrinsic Art Deco detailings.

Today, you can catch a vast array of entertainment from local performances of hit musicals such as The Phantom of the Opera to global musicians.

Performances take place on most nights, so there is bound to be something on while you are visiting! However, in most cases, you will need to purchase tickets in advance.

On the Tennessee side of Bristol, you will find Steele Creek Park, a wonderful 2,200-acre park on the edge of a lake.

The area had originally been set aside for a state park, but it never came to fruition and in the 60s, the city built and opened Steele Creek Park on the land.

The park is a great place to spend the day, with fun activities available for all ages. On the lake, you can rent paddle boats during the summer and explore the large lake.

One of the best things to do in the park is to play disc golf on an 18 hole course with varying difficulties. The course has 9 holes focusing on distance and the other holes look to challenge your finesse as you navigate throwing through a wooded area.

Alternatively, simply take the opportunity to walk around the park and soak up the stunning nature of the southern Appalachians. For those interested in learning more about the wildlife in the area, there is a nature center that is split over two floors and has many fantastic displays on show.

Along with coffee, they serve a range of other drinks, from teas to freshly-made smoothies. During the week, they offer up a great range of breakfast and lunch options, including items that suit all dietary needs.

On the weekends, you can enjoy a brilliant brunch selection. In the evenings, the cafe hosts a range of events, such as bingo nights, live music, or art classes.

Bloom Cafe aims to support the community and along with being a great event space, they have a rotating selection of artwork on the walls by local artists, some of which can be purchased.

State Street is the historic district of Bristol and it marks the dividing line between Virginia and Tennessee. Recently, there has been a focus on developing the area and rejuvenating the city center that, for a time, suffered from economic decline.

The rebirth of the historic district focused on its rich arts and entertainment heritage, especially when it comes to country music. The opening of the Birthplace of Country Music Museum highlights the important role the city played in the commercialization of music.

Every night of the week, you will find venues with live music, showcasing both local and more established musicians. There are also plenty of street performers, hailing from all over the country, who put on shows for free to anyone willing to stop and watch.

Occasionally, the street is closed to traffic for concerts and festivals. The community also focused on the aesthetic appeal of the city center, with stylized signs, lamp posts, and building facades.

The state line between Virginia and Tennessee runs straight down the middle of State Street, separating the states and the twin cities of Bristol, TN and Bristol, VA.

The most iconic feature of this unique state border is the Bristol Virginia-Tennessee slogan sign. The sign was originally located above a hardware store and had the slogan “PUSH!- That’s Bristol”, celebrating the city and its growth into the future.

The sign was then moved to its current location and the slogan was changed to “A Great Place to Live”. I recommend checking out the sign at sunset when the lights switch on and more than 1,000 bulbs light up and contrast against the darkening skies.

There are only a few lakes in Virginia, and the South Holston Lake and Dam is one of the most impressive. The 7,850-acre lake sprawls across the Tennessee and Virginia border.

With its impressive backdrop of the Appalachian Mountains, the lake hosts an immense range of things to do and see. Throughout South Holston, there are little islands and islets that are perfect little destinations for kayakers and paddle boarders to reach and explore.

For swimmers, Jacobs Creek Recreation Area includes a safe swimming area that is suitable for all ages. For those looking for a more exhilarating activity, the lake is also a popular place for scuba divers. There are a few dive shops around the lake that offer scuba diving courses and the chance to experience open water diving in the depths of the lake.

If you want to keep dry, there are plenty of hikes that work their way through the forests and along the shore line. As you hike, stunning routes like the Virginia Creeper Trail (one of the best bike trails in Virginia), keep an eye out for the spectacular wildlife that lives in the area.

There are a number of rare songbirds that call the forests home, while snakes and turtles are often seen in the water and along the shoreline.

It is the largest self-painting pottery studio in the country and can be visited without reservations (although if you are in a large group, you should call in advance to make sure there is enough space).

Once you have picked the item you wish to paint, you can sit in the studio to paint the piece however you want. The item then takes about a week to dry as it is blasted in the kiln.

The cost depends entirely on the item that you wish to paint and a $10 fee covers the paint and kiln costs. Alternatively, you can create masterpieces using fused glass or take one of the many art classes the studio holds.

While the products take a while to be completed, if you will not be in the area when they are finished they will mail them to you or hold them for up to six months.

As the rejuvenation of downtown Bristol takes place, more creative industries started to move into the area. State Street Brewing opened with the mission of making Bristol a hub for craft beer enthusiasts.

Located in the heart of the historic district, the brewery offers a solid range of core beers as well as an ever changing list of experimental beers.

I recommend trying some of the German styles of beers on offer such as the Kölsch or the Dunkel beer. And, of course, their small-batch beers and collabs are all also of high-quality and worthy of being checked out! The tap room is open from Wednesday to Sunday.

Opened in 1942, the Original Burger Bar has been a staple in the heart of the city, although the name and ownership have changed throughout the years.

Its current carnation celebrates the restaurant’s history and the Americana-style of the mid-20th-century. The burgers in the restaurant are superb and available with various toppings.

However, in my opinion, nothing beats the classic bacon cheeseburger, or the “I Can’t Help It” Burger as it is called in the diner.

All of the burgers in the diner are named after Hank Williams songs, as the diner was possibly the last place he was seen alive before his death. If burgers are not your cup of tea, the restaurant also serves up a range of classic diner dishes.

The diner is open Monday – Saturday. On Saturdays, it is open from breakfast until stock runs out.

Places To Stay In Bristol

There are several hotel options throughout the twin cities, perfect for all budgets.

However, during Nascar events, the hotels can book up quickly, and if you are not heading to Bristol for the speedway I recommend planning a trip for there is no race.

Have you visited Bristol?  Let us know your top things to do in Bristol TN and VA in the comments!

Pin this Things to do in Bristol VA / TN Guide! 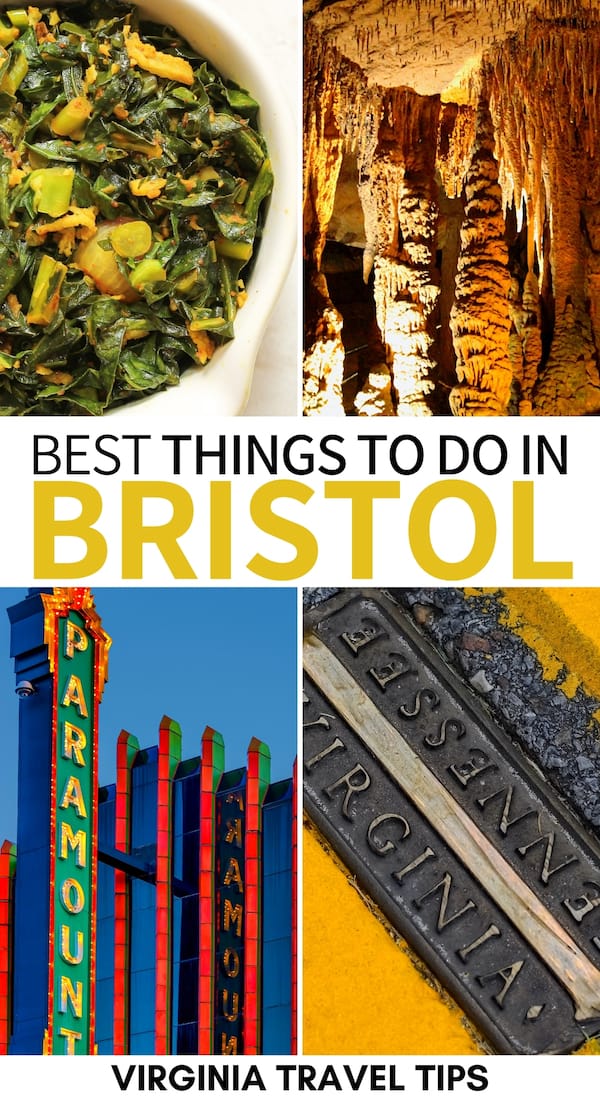