If you love lighthouses as much as I do, then you will love checking out these beautiful lighthouses in North Carolina!

While only 7 remain in operation today, you can visit them all whether it be from the inside or from afar!  This guide details all of those North Carolina lighthouses, their history, and how you can (or can’t) visit the mind-blowing structure.

Have you ever visited one of these lighthouses in NC? Leave us a comment and let us know!

And, if you’re heading north, be sure to check out our guide to the best lighthouses in Virginia.

Currituck Beach Lighthouse is located in the heart of Corolla in the northern part of the Outer Banks. At 162 feet tall, it still operates with its first-order Fresnel lens, which are considered to be the largest in use for lighthouses in the US.

The construction of the lighthouse began in 1872 and lasted for around three years. Since December 1st, 1875, the lighthouse’s primary goal was to serve as a navigational aid and illuminate the uninhabited coastlines where many shipwrecks had been occurring at the time.

The bright light of the lighthouse that still flashes for three seconds every 20 seconds can be seen from as far as 18 nautical miles away.

The eye-catching red brick exterior differentiates itself from neighboring lighthouses situated in the Outer Banks.

Get all the way to the top by climbing all 220 steps and witness the magnificent views of Whalehead!

The cost for climbing the lighthouse is $12 and the experience is available to the public from early spring until late November except for days with thunderstorms, high winds, and other extreme weather cases.

At the lighthouse base, you can get acquainted with the structure’s history through various museum-quality displays.

The Currituck Beach Lighthouse is owned by Outer Banks Conservationists who regularly perform renovations and restoration activities on it. Corolla is one of the best towns in the Outer Banks and this lighthouse is a great reason to visit and explore the town!

Located to the north of Cape Hatteras National Seashore and south of Nags Head and Whalebone Junction, the 214-step Bodie Island Lighthouse (pronounced “Body”) was built in 1872 as a navigational aid and still operates with its powerful light beams using a first-order Fresnel lens.

The lighthouse is the third one built in this area after its two preceding ones were either abandoned due to poor structural base or destroyed during the Civil War.

At 156-feet tall and with a distinct design of black and white horizontal stripes, Bodie Island Lighthouse stands out in an area surrounded by dense greenery.

It makes full light rotations in 27.5 seconds and can be clearly seen from up to 19 miles off the coast. The area is the perfect place for those who want to know a little bit more about the local history and admire the surrounding marshlands, forests, and ponds.

It was recently restored by the National Park Service and again opened its doors to the public.

You can find a visitor center with a small gift shop and a museum on the lighthouse grounds. Tours are offered in the lighthouse for a small fee during the summer months.

Cape Hatteras Lighthouse is the USA’s tallest and most well-known brick lighthouse and it is located in the Outer Banks in Buxton. It is the second lighthouse on Hatteras Island and it went into operation on December 1st, 1870.

The previous one wasn’t effective in guiding the ships, so they decided to enhance it by building it taller by an additional 60 feet. After the renovation, it made the lighthouse a startling 208 feet! Finally, it was moved 2900 feet inland to avoid beach erosion.

Cape Hatteras Lighthouse has candy cane-like black and white stripes (typical pattern of lighthouse artwork) and a bright red bottom to increase visibility during the day.

It protects the Outer Banks’ shores with its noticeable light, which can be seen for up to 20 miles into the ocean. Climbing 257 steps to the very top of the lighthouse, you can witness the gorgeous panoramic views of Hatteras Island.

The lighthouse has a small fee ($8) for climbers and is open to the public from mid-spring to mid-fall. It offers full moon evening tours once a month and is also available for organizing weddings or other special events.

The lighthouse’s ground offers its guests the museum and a gift shop, plus a neighboring shaded picnic area and a 0.75-mile nature trail. Buxton is truly one of the most peaceful towns in North Carolina and worth a visit.

Located in Ocracoke village at the southern end of Cape Hatteras National Seashore, the stark white Ocracoke Lighthouse is the oldest lighthouse in North Carolina and the second oldest in the US.

In the 1730s, navigating through Ocracoke Inlet, the state of North Carolina’s most important and busiest inlet, was a challenging thing to do, so the idea of building a lighthouse was brought to life.

In 1794, a wooden pyramid-shaped tower and a keeper’s house were constructed on Shell Castle Island to assist sailors. However, about 20 years later, powerful lightning destroyed both of them.

A better-located, sturdier, and an automated lighthouse was lit in 1823 and it still stands today and is in operation.

Ocracoke Lighthouse is the smallest one (65-feet tall with 86 steps) in the Outer Banks; however, its size doesn’t hinder it from protecting the shores of the island with its 4th order Fresnel lens, a fixed light that can be observed 14 miles out into the Atlantic Ocean.

The lighthouse is not open for climbers due to safety issues and it doesn’t have any visitor centers or gift shops nearby. However, those interested in learning a bit more about the lighthouse and buying a few souvenirs can do so in the many gift shops on Ocracoke.

Cape Lookout Lighthouse is the southernmost and most remote lighthouse in the Outer Banks and it is considered one of Cape Lookout National Seashore’s most popular spots.

Cape Lookout Lighthouse is the second one along the National Seashore, which successfully replaced the previous one that, due to its height, wasn’t really effective in guiding mariners. It started its operation in 1859 but it got its distinctive patterned exterior later in 1873 due to the Civil War.

Being 163-feet tall and having the original first-order Fresnel lens installed allowed the beacon to perfectly illuminate the surrounding region and protect the shores known to be the primary destination for countless shipwrecks with its flashing light reaching up to 19 nautical miles.

The lighthouse has diamond-like black-and-white patterns, making it stand out from other lighthouses on the Outer Banks. You will need a privately owned boat or to use the Island Express Ferry Service to get there.

You can climb the lighthouse (207 steps) from mid-May to mid-September with a small fee ($8) and admire the scenic views of the undeveloped NC beach and crystal-clear ocean. You will find a museum, seasonal programs, various booklets, and a gift shop in the nearby Light Station Visitor Center.

Oak Island Lighthouse, built in 1957, is the newest lighthouse in North Carolina and is located on the eastern part of Oak Island along Caswell Beach Road.

Its primary purpose was to support the neighboring Bald Head Island lighthouse and guide the ocean traffic coming down the Cape Fear River and the Atlantic Ocean’s shoreline.

The all-concrete lighthouse is 153 feet tall and has a unique exterior design with 3 color blocks (white, grey, and black). The interior of the lighthouse definitely stands out from others with its modern technologies.

You will find ship ladders (131 steps) instead of the traditional spiral staircase and a lantern room with the newest 8 aero beacon lenses with a powerful one-second flash of light beaming every 10 seconds.

Tours completely free of charge are available either to the second floor or all the way up to the top of the lighthouse, where you can witness mesmerizing views of the island.

There aren’t any museums or gift shops adjacent to the lighthouse, but you can find plenty of them, plus restaurants, in the neighboring town of Caswell Beach and Oak Island.

Old Baldy Lighthouse, located on Bald Head Island on the riverbank of the Cape Fear River, is the shortest of all North Carolina lighthouses and is considered the oldest standing lighthouse in the US.

First lit in 1817, Old Baldy Lighthouse is 110-feet tall and has a lantern with 15 lamps and reflectors. It grabs one’s attention with its unique ancient form, which underwent various natural changes over the decades, which eventually gave way to the charming look it has now!

Its aim had never been to guide the mariners on the coastline of the Atlantic but rather to provide enough illumination for vessels passing through the Cape Fear River.

During WWII, it served as a radio beacon for warning the US about the presence of nearby German U-boats. This is the second lighthouse guarding the riverbank of Cape Fear and was an improved version of the previous one.

Nearby, you can visit the Keeper’s Cottage, also known as the Smith Island Museum of History. It now serves as a museum, exhibiting the highlights of the 200-year-old lighthouse’s remarkable history.

There, you can purchase the tickets for your tour for $5, which are available seasonally except throughout the winter months.

Have you ever had a chance to visit one of these lighthouses in North Carolina? Please share your experience below! 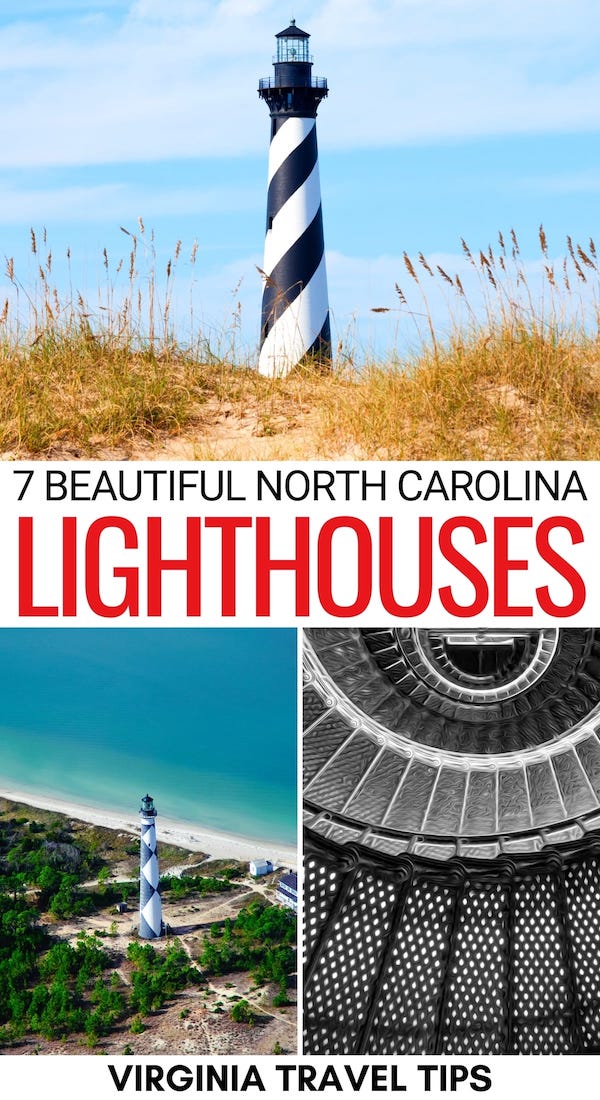