Are you looking for an epic place to visit in Kentucky? This guide contains the best weekend getaways in Kentucky – including nature, cities, and more.

There are several interesting destinations in Kentucky that can make for an unforgettable couple of days.

These weekend trips in Kentucky offer some of the best the state has to offer – from a national park (and the world’s longest cave system) to charming Lexington and more!

Did we miss one of your favorite Kentucky weekend getaways? Let us know in the comments!

The Red River Gorge is one of the most beautiful natural sites to see in Kentucky. Some of the stunning features visitors can see here include the sandstone cliffs, rock shelters, waterfalls, and natural bridges.

The sandstone formations allowed the canyon to become one of the most popular rock-climbing destinations in the world, so the Red River Gorge is definitely the best place to check out if you love that activity.

Besides rock-climbing, the Red River Gorge is also home to hiking trails, especially the Gray’s Arch Loop hiking trail, which all range in difficulty depending on your level of experience.

There are also campgrounds in the area and the ability for people to go backpack camping.

This is definitely one of the best weekend getaways in Kentucky for nature lovers!

Lexington is Kentucky’s second-largest city and known as the Horse Capital of the World. The town is also the heart of the Bluegrass region due to the Festival of the Bluegrass, which is held every year in early June.

More notable sites to see are the Kentucky Horse Park and the Red Mile and Keeneland race courses, all of which are famous locations in the state for horse races.

Be sure to check out the websites for these locations to learn more about when the horse races will take place.

It is also a college town because of the different universities in the area, including Transylvania University and the University of Kentucky. Lexington is home to five public golf courses, five dog parks, and a public skate park as well, giving everyone that visits something to do.

Newport, Kentucky is located on the Ohio River in the northern part of the state. Located close to Cincinnati, Newport was once a popular site for burlesque clubs and gambling to contrast Cincinnati’s ‘conservative’ nature (I used to go there for late-night partying).

Nowadays, Newport is known for its family-friendly attractions and is a popular site for both locals and tourists.

The first most popular site people like to visit here is the Newport Aquarium, which is known for its unique design in a glass-surrounded tunnel and large underwater exhibits.

The aquarium is open from 10 AM to 6 PM every day, and hours are extended in the summer. Visitors should also check out the World Peace Bell, which is open from Monday to Saturday from 10 AM to 4 PM, which was supposed to be part of the Millennium Monument.

To check out the history of the location, go to the East Row Historic District, which is home to 19th-century Victorian homes.

The Brown Hotel in Louisville

The Brown Hotel is an architectural treasure in Louisville, Kentucky. The hotel is known for its Georgian architecture and Southern charm. Located right in downtown Louisville, it is the best place to stay or visit during your trip to the state!

It is located by the Brown Theater, the Palace Theater, and the Kentucky International Convention Center. In addition, the Brown Hotel offers some of the best dining in Louisville, including the English Grill and J. Graham’s Cafe.

It is also known as the birthplace of the Hot Brown, which is an open-faced turkey sandwich with bacon and Mornay sauce.

Whether you’re looking for a luxurious place to stay during a visit to Louisville or you just want to get a taste of the city’s history, be sure to swing by the Brown Hotel!

The first public state park in Kentucky, Pine Mountain State Resort Park, is one of the most stunning outdoor locations in the state. People with all different interests can visit the state park for activities such as swimming, picnicking, an outdoor theater at the Laurel Cove Amphitheater, and miniature golf.

In addition, it offers 12 miles of self-guided trails, some of which include Honeymoon Falls, Rock Hotel, and Timber Ridge.

If you prefer professional golf, the 18-hole Wasioto Winds golf course is the place to be, especially for the gorgeous scenery.

Finally, you can also go birdwatching, especially considering that this area is home to some of the most unique bird species.

If you are looking for a place to stay, the Herndon J. Evans Lodge offers mountain views and 30 rooms.

If you love bourbon, then Bardstown is the place to be for your Kentucky weekend trip!

It is the ultimate bourbon getaway featuring 11 distilleries. In fact, Bardstown is considered to be the Bourbon Capital of the World! Some of the most popular distilleries in the area are the Barton Distillery, the Heaven Hill Distillery, and Willett.

Visitors can also check out the Kentucky Bourbon Festival to celebrate the production of bourbon in Bardstown. It is also the second-oldest city in Kentucky, which was also labeled the Most Beautiful Small Town in America.

In order to get a better view of the city, you can go on a self-guided walking tour of the historic downtown. You can also check out the Civil War Museum, which is the fourth-largest Civil War museum in the US.

The Oscar Getz Museum of Whiskey provides a history of Bardstown’s involvement in whiskey production or the Wickland residence, the residence of three Kentucky governors.

Mammoth Cave National Park is one of the most spectacular national parks in the state, providing views of forests, valleys, and historic churches. However, it is most popular for being home to the world’s longest cave system.

The self-guided extended historic tour of the cave will enable you to learn more about the longest cave in the world, its 5,000-year-history, and the historic saltpeter mining site.

The cave also offers notable features such as the Grand Avenue, Frozen Niagara, and Fat Man’s Misery, which you can see on lighted tours. The Echo River Tour will also take you on a ride along the underground river.

Next, if you enjoy activities such as biking and hiking, there are plenty of trails to check out ranging in difficulty, including the Mammoth Cave Railroad Bike and Hike Trail and the Big Hollow Trail.

You can go canoeing, kayaking, and boating along the Green and Nolin Rivers, and stargazing at night.

Versailles, Kentucky is known for its quaint, small-town vibes and the multiple attractions throughout the city. You can take a tour of the distilleries with the Kentucky Bourbon Tour or visit the town’s multiple distilleries.

In addition, you can go on a guided tour of the gorgeous Kentucky Castle, including the castle grounds. But one of the most popular sites in Versailles is the Three Chimneys Farm, which is an American Thoroughbred racehorse farm.

Since Kentucky is known for its horse races, it’s no surprise that the Three Chimney Farm is the site to see for fans of the Kentucky Derby.

Seven horses currently stay at the Three Chimney Farm, and you can watch all of them compete during your visit.

Lake Cumberland State Resort Park in Jamestown, Kentucky is known for its stunning views of nature and beautiful lodging. The Lure Lodge is one of the most popular lodges, but the park is also home to 129 campsites.

Many people enjoy watching the sunrise and sunset from their campsites. There are also plenty of birdwatching opportunities because of the stunning species throughout the park.

Lake Cumberland is known as the Houseboat Capital of the World because it is known as a paradise for anyone who likes water sports. You can rent a fishing boat, pontoon boat, houseboat, or ski boat.

There are scenic hiking trails throughout the park, as well as multiple geocaching opportunities. But one of the most popular activities people enjoy is disc golf, which is played like regular golf but using a flying disc or frisbee instead.

Located in the southern portion of the state, Bowling Green is home to plenty of unique attractions and museums for anyone who loves art, history, and sports. It truly is one of the best weekend trips in Kentucky!

Check out the National Corvette Museum to view more than 75 Corvettes on display. You can also visit the Kentucky Museum and Library, which is home to plenty of materials and manuscripts to describe Kentucky’s history and heritage.

It is also home to plenty of golf courses, parks, and community centers.

For nature lovers, the Lost River Cave is a gorgeous cave system that features the Lost River, which is considered the shortest, deepest river in the world.

For family-friendly sites, Beech Bend Park is a fun amusement park open between May and September.

Paducah, Kentucky is located in the westernmost part of the state in the Jackson Purchase region.

Designated as a UNESCO Creative City, any art and culture lover will find lots to explore in Paducah. Check out the LowerTown Arts District, which is the oldest neighborhood in the city that also features artist studios, novelty shops, and local crafts boutiques.

In addition, you can visit the floodwall murals as part of the Paducah Wall to Wall project, which showcases 50 murals that display the history and heritage of the city.

The Barbecue on the River festival is also a delicious and fun event to taste delicious smoked chicken and pork.

Finally, you should also visit the National Quilt Museum. It’s way more interesting than it sounds, and the museum features the work of modern quilters.

The Pinnacles of Berea are considered to be the best hike in Kentucky. While it might seem as though you’re hiking through an average forest in the beginning, you’ll quickly find that the hike leads to spectacular views of the state in every direction.

Some of the popular trails include the East Pinnacle, West Pinnacle, Buzzards Root, and Eagles Nest. There are many sites to see in this location, but keep in mind that there are some strenuous hills and rock climbing in the area.

You can bring your dogs, but camping is not allowed. It is also close to the Daniel Boone National Forest, and the Pinnacles are close to many local restaurants and lodging sites to make your stay even better.

What are your favorite weekend getaways in Kentucky? Let us know in the comments! Thanks! 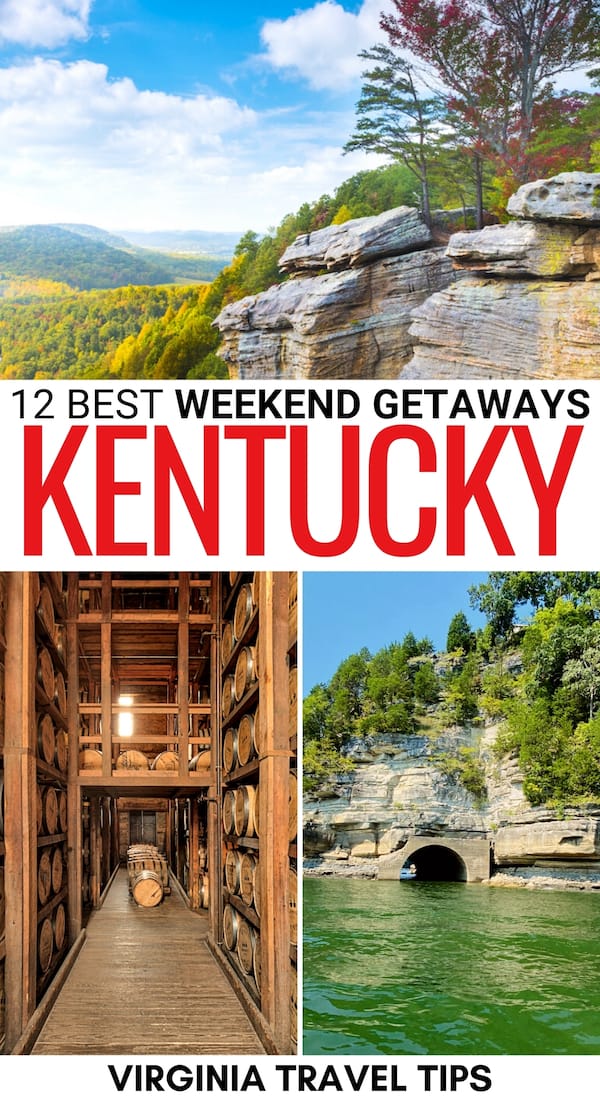